This illustration map drawn for a book “Joujouka Moroccan Mysterious Village and Its Magical Music” issued two years ago. I did not upload the entire illustration on the net. Because I wanted you to buy a book first. But since 2 years have passed, I think it’s time to upload. 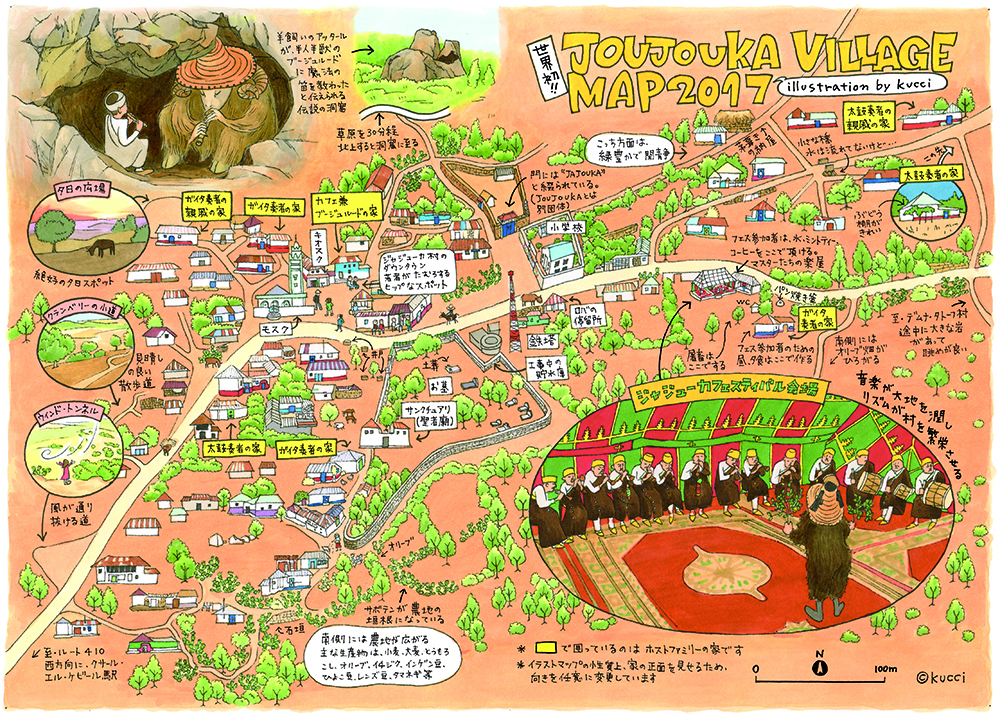 It’s an illustration map of Joujouka village printed at the beginning of the book. This is printed on A5 size book spread pages, so I drew it in A4 size.
It is very difficult to draw the whole village in A4 size so that each house can be identified. However, it became possible because of a small village.

What is joujouka? This is the name of a small village in northern Morocco, and the name of folk music that has been passed on for thousands of years.
Since being introduced in 1971 by Brian Jones’s album “JOUJOUKA”, it has become known all over the world.

For me who love travel, love painting, and love maps, the job of drawing illustration maps was my longing. I was very happy that the first job of the illustration map was Joujouka village, where no one had ever drawn. That’s why I walked around the village and drew with enthusiasm. 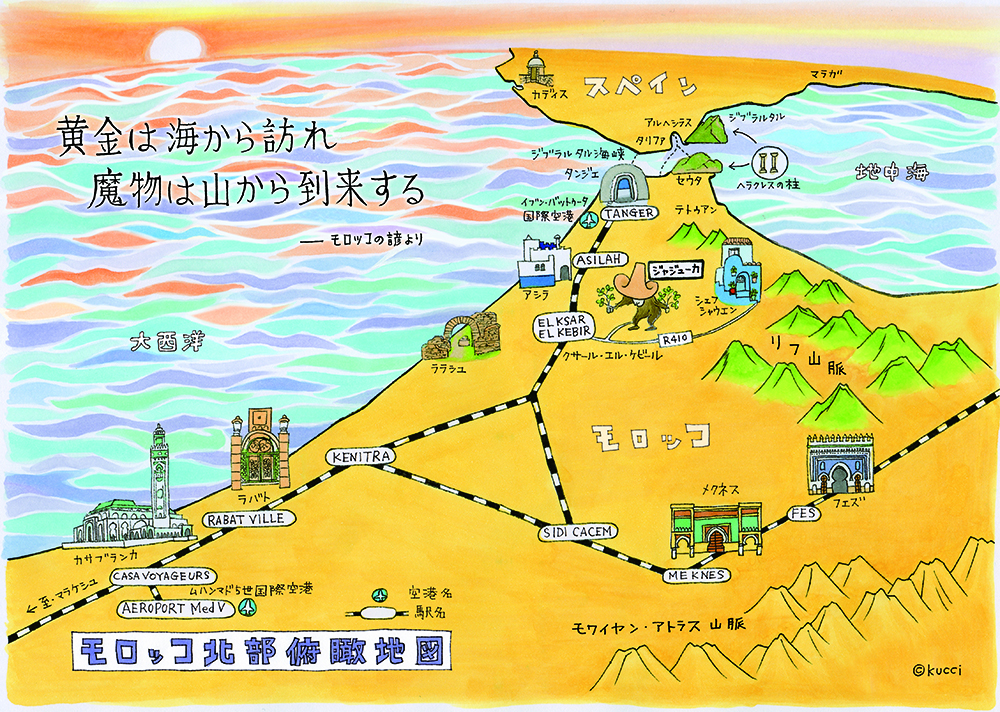 And here is a map overlooking northern Morocco.
The Japanese word “黄金は海から訪れ 魔物は山から到来する” written in the upper left is a proverb from Tangier meaning “Golden comes from the sea and the monsters come from the mountains”.
I regard the various blessings that come from the temperate climate surrounded by the Atlantic Ocean and the Mediterranean as the “golden” of the sea, and the half-human and half-beast Boujeloud — which is similar to the Greek mythical Phan god — that appear in the festival of Joujouka as the “monsters” of the mountains, I drew a pictorial map with this image.

In the trip two years ago, I went around the following route.
Casablanca → Fes → Tangier → Joujouca village → Chef Chefchaouen → Tangier → Tarifa (Spain) → Tangier → Asilah → Rabat → Casablanca
So, The places I drew on this map are almost visited.

Sunset in South of Tangier 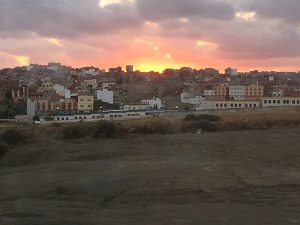 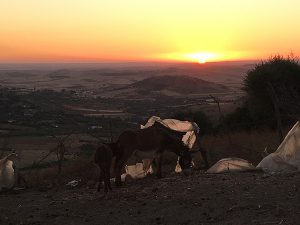 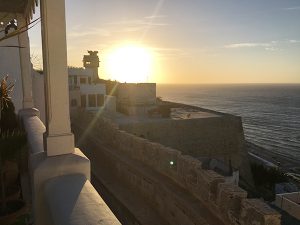 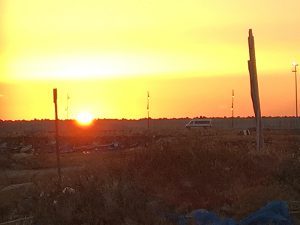 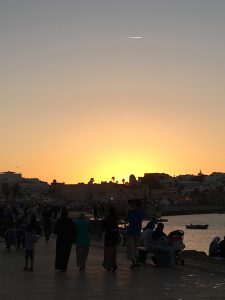 So I wanted to draw a sunset on the map.

And I also introduce details of Joujouka village with many illustrations. 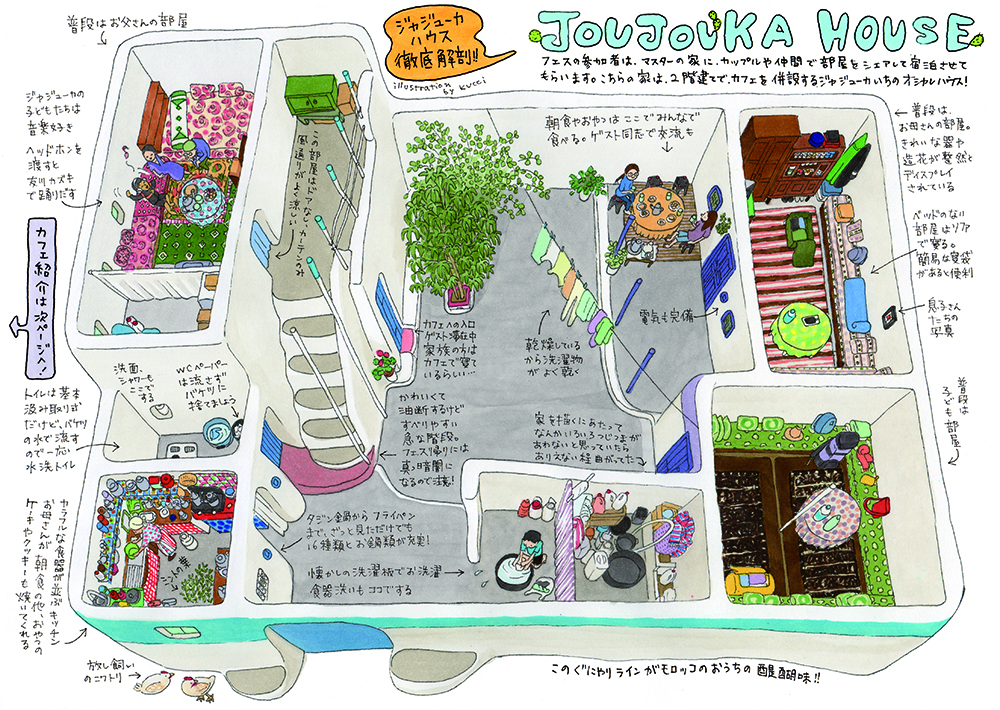 This is the most fashionable house with a cafe in Joujouka village.
I think there are many people who have a horrible impression in this village due to the influence of Brian Jones’s album “JOUJOUKA”, but In fact, it was a heartwarming atmosphere that would appeal to girls who love to travel. 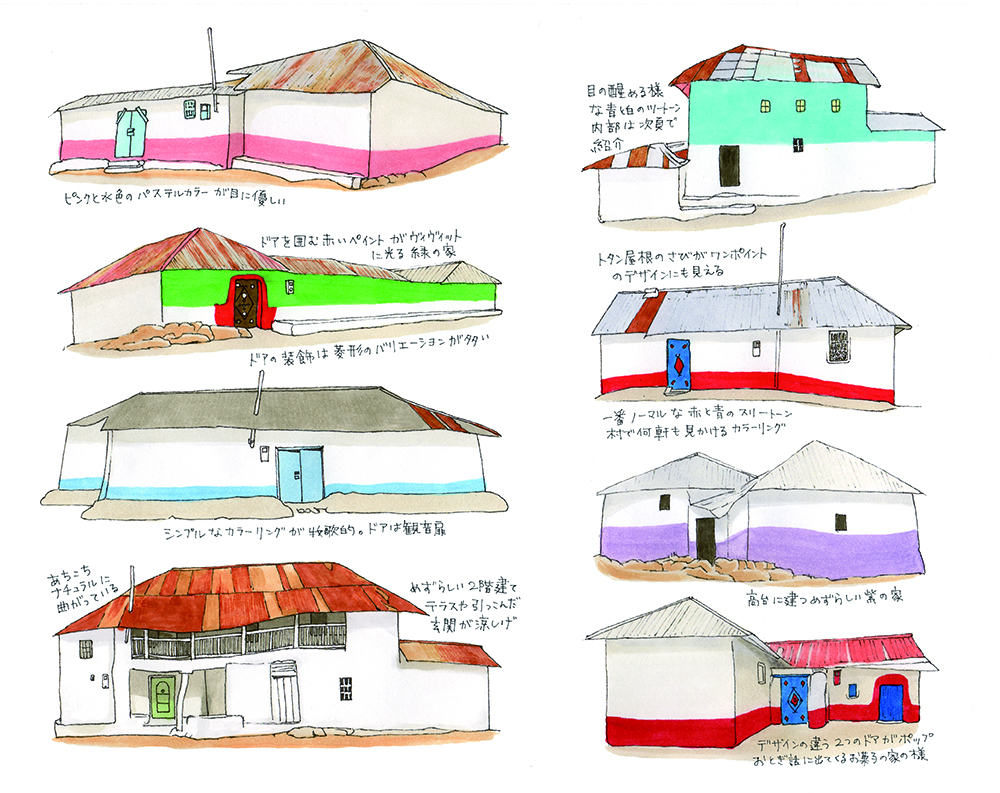 The two-tone wall and the rhombus design of the door are lovely.
We can stay at such a house during the festival.

And I drew friendly villagers. 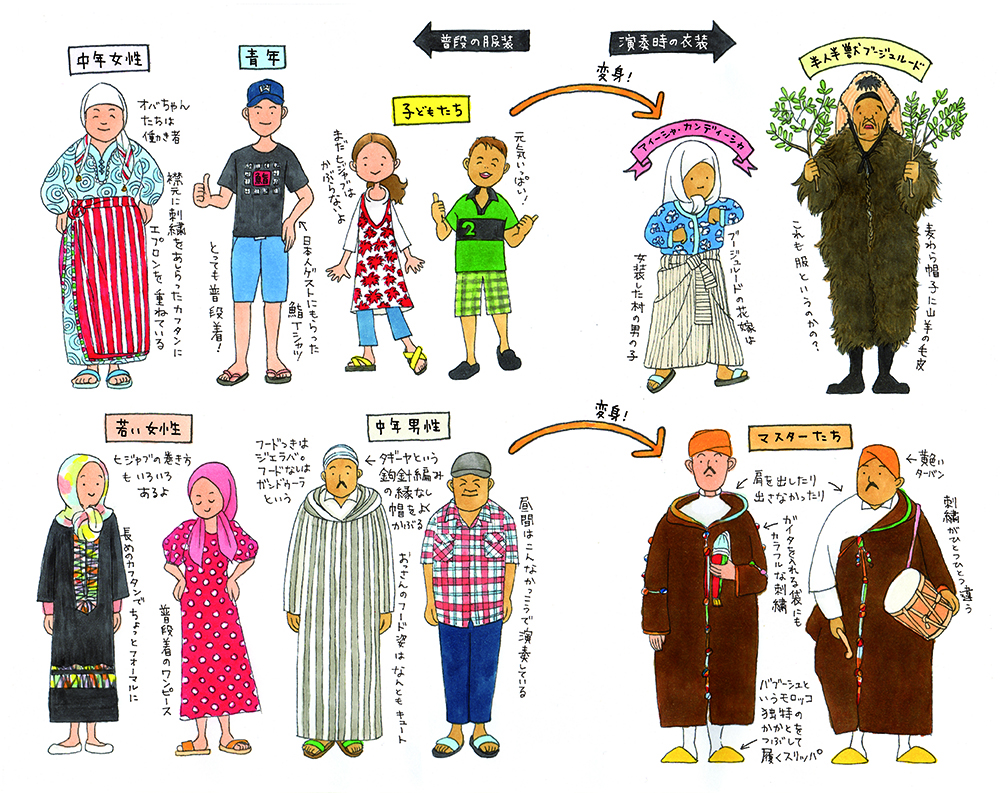 It seems that the masters (musicians) are wearing a djellaba (coat) that is handmade in the village.

I also wrote a sentence that reported slaughter.
This is a precious book compiled the whole trip, with my friends.
If you are interested, please buy at amazon.

However, for me who have been mainly working on clay art, it’s not a mainstream work, so I have never been asked to do any travel-related work after this publication.
I recently traveled to Korea and loved the Asian region, so if I get a job, I will draw with my soul!
I’m waiting for travel related work!